Last summer, back when we could still go to the pub, I went for a pint with a couple of friends near my house. Among various things, we ended up talking about dreams. My friend started talking about a very strange dream he’d had the previous night that had really shaken him. It involved war and death. It obviously caught our attention, and I came out with the usual, “Mate, maybe you should go see a therapist, but a good one!”

To which another friend replied, “Hey, did you know there is an online psychology and psychotherapy service called Unobravo?”*

*(Unobravo = A Good One in English)

We wanted to know more about the service, and we are honoured to have interviewed the founder of Unobravo, Dr Danila De Stefano, who has just been featured in the Forbes 30 Under 30 list for Italy.

Hi Doctor De Stefano. How are you?

Where are you at the moment, and how did you get the idea for Unobravo?

I’m currently in Peterborough, near Cambridge. The company is Italian, but it all started in London, where I moved in 2016 and started working as a psychologist. But more than anything else, London is where I personally experienced difficulty finding a psychologist who spoke Italian. While looking for a service, I realised there really wasn’t much availability. There was often a long waiting list, and the costs were fairly significant. And so I thought to myself, what would a fellow Italian do in this situation? And I came up with the idea for the project.

What did you used to do in London and how have things developed from there?

I graduated as a psychologist in Italy, and in order to qualify, I worked in a few psychiatric clinics in London. From there, I started working independently as a psychologist for the online Italian ex-pat community. Then in around 2018, my project started to gain traction and I found myself becoming an entrepreneur within a very short space of time. We now have a workforce of 250 psychologists and around 2,500 active patients all over the world. Initially, the service focused on ex-pats, but now, as a consequence of Covid, we have a 50-50% split of patients from Italy and abroad, and we’ve conducted approximately 30,000 sessions to date.

I think the name is brilliant and really helps the website to succeed. How did you come up with it?

I agree, the name is spot on. To be honest, there isn’t really a story behind the name. The idea just came to me as a “Eureka!” moment one day. The name sticks in your head and makes you smile, which is one of our missions. In the sense that psychology is a wonderful field but it’s still somewhat of a heavy subject, in Italy in particular, so the friendly name helps with that.

Do you think that people choosing to start therapy online open up a little easier? And what are the limits of remote sessions?

Well, body language is very important, so the limit lies is not having a full view of the patient’s body. For example, if I were treating a patient with anorexia, I might realise as he or she walks into the room, while on a video call, it can take a little longer for it to click. One thing we have noticed, however, is that aside from being able to talk from the comfort of their own home, people also experience what we call the “screen effect”. You know when people feel more able to write negative things online because they don’t have to face the consequences? It’s a bit like that. What I mean to say is that when you’re behind the safety of a screen you feel more able to open up. You feel less apprehensive, and therefore less resistant, which allows you to establish a more genuine relationship. Video calls also allow us to analyse the space the patient is in and its dynamics, such as whether a child is running around the room, or there is someone sat behind them, or perhaps the patient prefers to be out of the house for therapy. So in a way, remote sessions can give us more information to work with than we might get at the clinic.

Also, we work a lot on empowering our therapists at Unobravo and training them to tackle online sessions.

How do you choose your therapists and how is your working relationship structured?

We conduct selective interviews as if candidates were employees. After applying on our website, applications are screened by our HR team. We then select the counsellors and therapists most suited to the needs of our patients depending on their specialisation. For example, if we need more professionals specialising in sex and relationships, we try to select people with experience in that field. After the selection process, we move on to an interview with our recruitment team, and once that step is complete, we sign a contract to on-board them in a self-employed capacity. This essentially means that they are working as a freelancer and can decide on their own availability, while we manage the platform and the services on offer, in addition to potential problems relating to therapy or patients. Our psychologists have access to a free monitoring service that protects them, and we also offer the same protection to our patients.

You work with ex-pats and people living at home in Italy. Are the topics you address similar or different depending on whether the person lives in Italy or abroad?

The fundamental issues are the same but they are often amplified in ex-pats, in terms of anxiety, relationship difficulties, etc. If you live at home with family, friends or people you know, it’s one thing, but if you’re experiencing the same situation without your support network, it can really amplify the difficulties you’re experiencing, and there’s a greater risk of isolation which only compounds the problems. Also, the stress of learning a second language is mentally challenging, as is adapting to a different culture, and not everyone has the same success.

There are also some difficulties that are typically experienced by ex-pats. Unfortunately, lots of people suffer from long periods of isolation before beginning to integrate, which can lead to depression or relationship problems. On the other hand, when people are in relationships abroad, milestones are often reached more quickly, sometimes out of the need to live together, etc. This can increase the risk of co-dependence, which occurs in couples with minimal social networks, who become increasingly attached to each other and fixate on every single problem. Toxic relationships exist in Italy, too, but the risk is often higher among the ex-pat community given the social situation they find themselves in.

When you think of the future, what are some of main problems that come to mind, and how do you think they relate to our use of the Internet?

Well, in terms of trends, some topics are timeless, such as anxiety, depression and relationship and social difficulties in general. Apart from being common, they tend to be very generic. It’s almost as if human beings have a tendency to respond to certain events in a certain way, or that we’re more inclined to certain psychological issues, and I think it is something that will continue in the future because it’s just human nature.

In terms of the web, there’s obviously the issue of comparison, which is exacerbated by social media, which connects us to more people but presents a happy facade. I think the online revolution is irreversible, and some people continue to resist it and cling onto old values, but it’s just a matter of fact that technology makes our lives a lot easier, even if it brings its own set of problems with it.

I think it just needs to be used in the right way.

We need more awareness. I often have to explain that what we see on social media is for the most part not real, and I was a little alarmed that I had to explain it because it was fairly apparent to me. But younger men, in particular, get really lost in it, and we should be aware of that phenomenon.

Do you think Unobravo would exist if you hadn’t left Italy?

Well, although I ended up moving to London, I also went travelling to the Dominican Republic, where I met a few digital nomads and totally fell in love with their lifestyle. I just love to travel so I would never have stayed in Italy. Perhaps I might not have settled here but it would have been somewhere else abroad for sure. As a person, I like the idea of living different lives and experimenting.

What advice would you give to people in the UK?

In terms of British culture specifically, I would probably recommend that people try to change course a little and to establish deeper social connections. It’s typical of the Italian and Spanish, but I’ve found that things are very different in the UK. Having superficial relationships is proven to be bad for our mental health. So perhaps I’d advise setting aside labels and appearance and focusing on substance and intimacy.

And what advice would you give to people in Italy?

I often notice that people feel trapped in a situation and have convinced themselves the situation cannot change. But when you are inside a bubble, it’s hard to see things from other perspectives, and this is where an external point of view can really help you get out of a situation, even if it’s just for your own personal growth. In Italy, we need to stop believing that psychologists only treat people with severe mental illness. It’s one of those countries in which there’s a real stigma and scepticism towards the field. 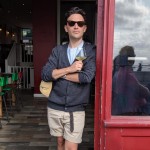 Born in Verona Emanuel is a never ending challenger seeking for discomfort, he left home 10 years ago to travel the world; now in London he wonders around trying new flavours of life, food and drinks, sipping coffee, and screaming at dirty punky gigs, with the backpack always ready on his bedside.

COVID-19: Tell us your story

Start typing to see results or hit ESC to close
lockdown suggestions watch read listen
See all results
Add a pinch of pepper to the news!
Back To Top